The Kindness of Cats 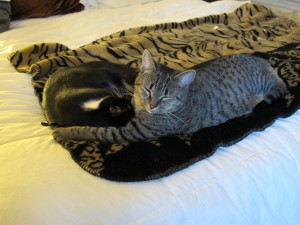 Katie (the gray tiger) taking care of Zoe after her injury.

Last week Zoe, our ten-month old cat, dislocated her jaw. To prevent her from re-injuring herself while she is healing, we have been keeping her confined to the master bedroom. We assumed that we would have to keep Katie, Zoe’s sister,  away from Zoe during this time. We thought Katie would be upset because Zoe smelled like a vet’s office. Katie was used to rough-housing with Zoe and might inadvertently hurt her. She would hate being locked in the bedroom, etc., etc. So when we brought Zoe home, we whisked her into the bedroom, closed the door, and wouldn’t let Katie in.

Katie wasn’t going to put up with that. Zoe had been missing for over eighteen hours. (Katie and Zoe were found by a construction crew in an abandoned restaurant when they were one week old. They were part of a litter of six and no mother cat was in sight. The kittens were taken to the local animal shelter and bottle-fed. We adopted Katie and Zoe when they were five weeks old. They have never been apart.) She sat outside the bedroom meowing non-stop. She scratched the door. Her meows became howls. We tried to calm her but she had only one goal: she wanted to see her sister. We finally relented and allowed Katie into the room and braced ourselves for the inevitable hissing and spitting once Katie got a whiff of Zoe’s Eau de Vet’s Office.

Zoe was high on pain medication. Her eyes were dilated and she was walking sideways. We had tried to get her to lie down, but she was too busy marveling at how groovy everything was to relax. We placed her on the bed and Katie jumped up to see just what was going on. She approached Zoe, who was rolling around on the blankets, and started sniffing. We were ready to grab Katie as soon as the fireworks started.

And then Katie lay down next to Zoe and began to wash her. Zoe, amazingly, calmed down. She snuggled close to her sister. Katie put both paws around Zoe, hugged her close, and continued to bathe her. Zoe fell asleep. Katie remained on the bed holding her sister and purring.

It has been one week since we brought Zoe home. Katie has spent nearly every hour of every day with Zoe. She seems to prefer being locked in the bedroom with her sister than having free run of the house without her. What a world it would be if humans had the kindness of cats.

When Mary was nine years old, she wrote her first blog. Yes, we know that the Internet did not exist then. In the olden days, nine year olds blogged by writing their thoughts on paper and handing them in to their teachers. If the teacher deemed the post worthy, she read it aloud to the class. We’d like to share Mary’s Thanksgiving  blog:

Happy Thanksgiving to everyone!