← A Time’s Edge Sampler: Do You Believe in Fate?
The Seven Stages of Writing → 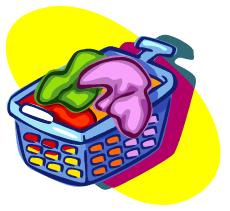 We were sorting the wash the other day and came across some new clothing that we thought might require hand washing or perhaps should not go into the dryer. So we did what we have done for years and looked for the washing instructions on the label.

And got a big surprise.

There were not any written instructions on any of the garments. Instead, obscure little symbols were printed on the minuscule tags. Being possessed of curiosity, we fetched a magnifying glass and peered at the strange markings.

We began guessing what the symbols might mean. The circle with the X, we understood to mean we should not do something. However, what the something was eluded us. Should the item not go into the washer? The dryer? Did it mean no bleach? Just what does a circle stand for in laundry-speak?

The triangle had two diagonal lines slanting through it. Interesting. The square had a circle and a dot in it. Fascinating. The trapezoid-like picture had a line drawn beneath. Incredible. But not very helpful.

Taking to our computer (an interesting new tool for doing the laundry), we looked up the mysterious markings. And got another surprise. On the textileaffairs.com website there were thirty-five separate symbols for laundry instructions.

Feeling like we were on a treasure hunt, we began to match the online symbols to the ones on our clothing tags. At last, we deciphered the instructions. Machine wash cold, permanent press. Non-chlorine bleach. Tumble dry low heat. Success! We could continue with the laundry!

We printed out a copy of the symbols and taped it to the washer, feeling a little like tourists in a foreign country with a tiny phrase book to help us learn the language. We wondered why written instructions have vanished. Were the symbols deemed quicker and easier to read? (Using the term “read” in the loosest sense, of course.) Did the creators of these new laundry pictograms believe the symbols were self-explanatory?  Do they take up less space? Are they supposed to be easily understood by anyone, anywhere, at any time?

Back to the computer for enlightenment. One site claimed “Symbols and visual cues are widely used today to present information in a simple, straightforward manner. They are more effective than words because they are more quickly interpreted and can overcome language barriers.” Simple, maybe, but straightforward? More quickly interpreted? Yes, if you have a computer handy. Overcome language barriers? We’d like to take our laundry symbols on a world tour and see how many people understand them.

Another site suggested that symbols convey basic information more rapidly than words. We suppose this might be true if the population was well-schooled in pictograms. However, we doubt this is so and do not even know if there is a standard for pictograms world-wide. A world tour definitely seems necessary to discover the truth. Can you picture us traveling with nothing more than pictograms? (Oh, this man with us? No, he’s not an interpreter. He’s a cartoonist and draws the fastest pictograms in the world.)

Whatever the reasons, we miss written words. Words convey instruction, ideas and a clarity that pictograms do not. In fact, if memory serves, the ancient Egyptians used pictograms, a form of writing they abandoned as soon as something less cumbersome made its appearance. It seems we’ve come full circle, but going in circles is not the same as moving forward.

More and more, our society seems to be using symbols to communicate, perhaps because 14% of Americans are functionally illiterate (as reported by the National Center for Educational Statistics). Doors, trash bins, elevators, bathrooms and many other things are now all marked with pictures instead of words. Whether this is seen as a necessity because of the high illiteracy rates plaguing our country or an attempt to make communication easier, we don’t know, but using pictures rather than teaching people to read seems more like a bandage than a cure.

Oh, the circle with the X through it? Do not dry clean. And we wonder, if the functionally illiterate can’t understand the symbol, just how are they going to look it up?

← A Time’s Edge Sampler: Do You Believe in Fate?
The Seven Stages of Writing →